In the fight for abolition of slavery, the question of citizenship arose frequently, specifically, the question of suffrage, or the right to cast a vote in Federal, State, and local elections. Early on, people seeking the vote for those without land, of African or Indigenous heritage, and for women found common cause in the Abolitionist movement. As time went by, and emancipation of slaves and the enfranchisement of Black men seemed more possible, rifts appeared between those intent on securing woman suffrage and those focused on ending slavery.

Some remained focused on both. Rev. James E. Crawford (1811–88) was one of the island’s “best known and most highly respected citizens.” Born in Virginia in 1811, he was the son of Mary, an enslaved woman, and the planter who owned her. He escaped slavery by going to sea, and studied for the ministry in Rhode Island, where he met and married Ann, a free Black woman from South Carolina. Ann’s sister and niece, although born free, were enslaved in the South. To raise money to buy their freedom, Reverend Crawford traveled through the Northern states and Canada speaking about his life experiences. When he had the money, he traveled into the South in 1858, on the eve of the Civil War. Because he had light skin, he was able to pass as a white man, at risk of being returned to slavery himself if caught, and purchase his sister-in-law and her daughter out of slavery for $1,700. He brought them back to Nantucket.

For forty years he served as minister of the Pleasant Street Baptist Church on Nantucket, also working as a barber to support his family. He was a powerful voice on the subject of woman suffrage.

Reverend George Bradburn, born in Attleboro, Massachusetts, in 1806, was minister of the First Universalist Church on Nantucket from 1827 to 1834. He was later elected to represent Nantucket to the Massachusetts Legislature, where he became widely known as an activist, fighting for abolition and universal suffrage. He was chosen to be a delegate to the World Anti-Slavery Convention of 1840, in London, at which American women were refused participation, and he boycotted the conference along with the Motts, William Lloyd Garrison, and Henry Stanton. Later, despite increasing deafness, he was one of the speakers through the year of “100 conventions,” launched across the North by the Anti-Slavery Society. He was on an extended lecture tour with Frederick Douglass in Indiana when they were attacked and Douglass’ hand was broken.

Lucretia Coffin Mott (1793–1880), Elizabeth Cady Stanton (1815–1902), and Susan B. Anthony (1820–1906) were at the core of the woman suffrage movement, which resulted in the 19th Amendment, enacted in 1920. All three were active abolitionists, although as African American men were freed from slavery and given citizenship and the right to vote with the passage of the 13th, 14th, and 15th Amendments, they split with abolitionists and focused on securing their own rights.

Lucretia Coffin Mott, born on Nantucket in 1793, cousin to Phebe Coffin Hanaford and Benjamin Franklin, was active in the fight for abolition and universal suffrage from an early age. Moving off the island at age 11, she kept up correspondence
with many Nantucketers, including the sisters Eunice Starbuck Hadwen and Eliza Starbuck Barney.

“Being a native of the island of Nantucket, where women were thought something of, and had some connection with the business arrangements of life, as well as their homes, I grew up so thoroughly imbued with woman’s rights that it was the most important question of my life from a very early day.”

Elizabeth Cady Stanton, born in Johnstown, New York, to a family who kept a man named Peter Teabout enslaved in their household, would eventually become known as a force in the woman suffrage movement, working alongside Lucretia Coffin Mott and Susan B. Anthony. Having experienced the practice of slaveholding from an early age, it was only through her cousin Gerrit Smith, a wealthy abolitionist in Peterboro, New York, that she started her journey into abolitionist activism.

Mott and Stanton met as American delegates to the London World Anti-Slavery Convention in 1840 and became friends, with the elder Mott becoming a mentor to Stanton. The convention refused to seat American female delegates, and many in the American delegation, including William Lloyd Garrison and George Bradburn, withdrew in protest. This incident would lead Stanton, Mott, her sister Martha Coffin Wright, and Jane Hunt to organize the now-famous Seneca Falls Convention in 1848. In 1851, Stanton met Susan B. Anthony, with whom she would form a lifelong partnership in support of women’s rights.

Anthony, born to a Quaker family in Adams, Massachusetts, moved to Rochester, New York, and became closely involved with the woman suffrage movement. Like Stanton, she was deeply involved in the abolitionist movement, even to the point of becoming part of the Underground Railroad. Although she did fall out with other leaders for their refusal to include women in their demands for equality for all, she did continue to support anti-slavery movements and went on to help create the American Equal Rights Association to fight for both causes. Interestingly her cousin is the noted whaling captain George Anthony of New Bedford.

Elizabeth Cady Stanton and Susan B. Anthony remained very close and worked together for woman suffrage all the way until their deaths in 1902 and 1906, respectively, with Stanton often writing the speeches that Anthony would present in public. “She forged the thunderbolts, and I fired them,” said Susan B. Anthony, paying tribute to Stanton at her death. Stanton felt the same: “She [Anthony] supplies the facts and statistics, I the philosophy and rhetoric, and, together, we have made arguments that have stood unshaken through the storms of long years—arguments that no one has answered. Our speeches may be considered the united product of our two brains.”

In 1878, they created the language of the 19th Amendment, which was offered to Congress every year from that time until it passed in 1919, forty-one years later.

In the late 1870s Anna Gardner returned to Massachusetts and became active in the Association for the Advancement of Women, and Sorosis, a nationwide organization educating and empowering women, in company with Nantucketers Phebe Coffin Hanaford, Maria Mitchell and others in the national fight for women’s right to vote. Back on Nantucket she helped found the Nantucket chapter of Sorosis, acting as secretary and president, giving lectures and organizing activities.

Phebe Ann Coffin Hanaford (1829-1921) was a Nantucket-born Quaker, minister, author, poet, writer, abolitionist, temperance reformer, and champion of women’s rights. Her religious beliefs and personal convictions led her to Universalism. In 1868, Hanaford was the first woman in New England—and only the third in the United States—to be ordained a Universalist minister. Hanaford was an ardent abo­litionist and women’s rights advocate, serving as the vice president of the Association for the Advancement of Women in 1874 and an active member of the American Equal Rights Association.

Hanaford and her husband separated shortly after her ordination. She lived with her partner Ellen Miles for the next 44 years, until Miles’s death in 1914. The closeness of their relationship was at least partly responsible for Hanaford’s dismissal from a congregation in New Jersey, which did not approve of ”the minister’s wife,” as Miles was described in one newspaper account.

Hanaford, like some others on Nantucket, found common cause between the needs of enslaved African-Americans and those of women for enfranchisement and agen­cy in business and political affairs, including the right to vote. Following enactment of the constitutional amendments ending slavery, she concentrated her efforts on improving women’s lives, preaching, writing and speaking. She was active in the explosive growth of women’s clubs in the white community (there had been Black women’s clubs since the early 1800s) following the founding of the Sorosis and the New England Women’s Club, in 1856. Women’s clubs grew out of church fellow­ship organizations, but rapidly came to fill the void left when women were denied access to higher education.

Of the pioneers of woman suffrage activism, she was the only one who lived to see enactment of the 19th Amendment in 1920.

Reverend Phebe Ann Hanaford was an active member of a variety of women’s social reform, literary, philosophical, and scientific organizations. This collection of pins belonged to Hanaford and includes examples from the Women Suffrage Association, the General Federation of Women’s Clubs, the New York Women’s Press Club, the American Association for the Advancement of Science, Phalo Club, Philit Scipoma, the Political Study Club, the New Century Study Circle, the New York Society of the Daughters of 1812, and the Woman’s Congress at the 1896 Cuban-American Fair. 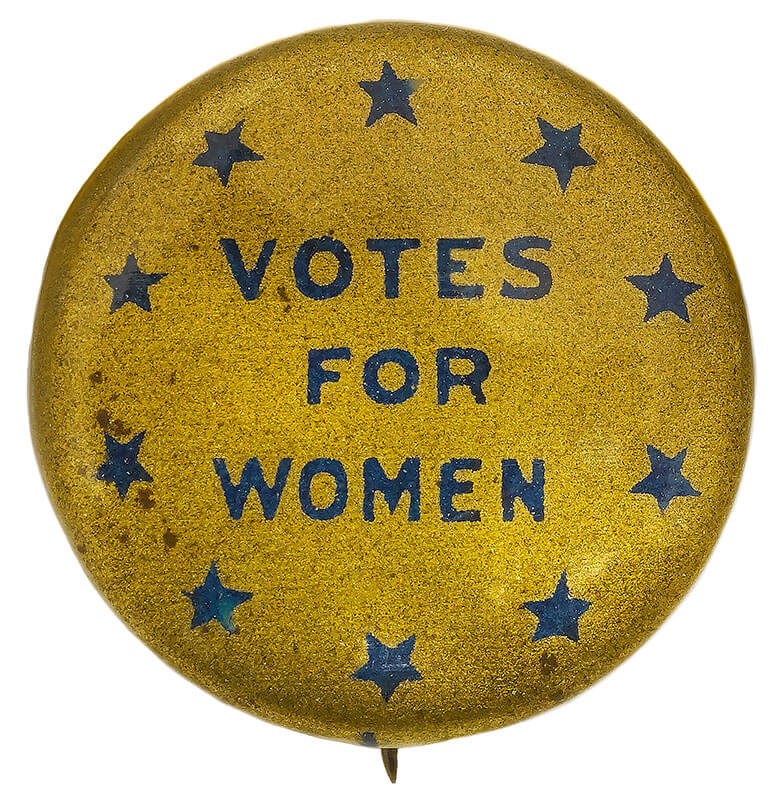 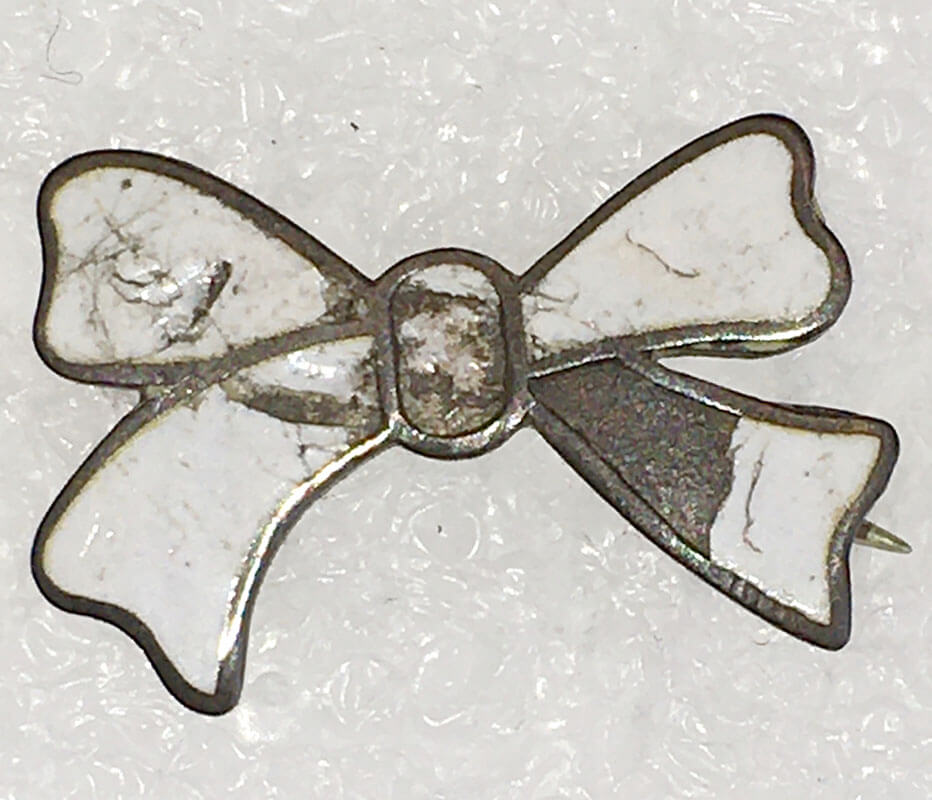 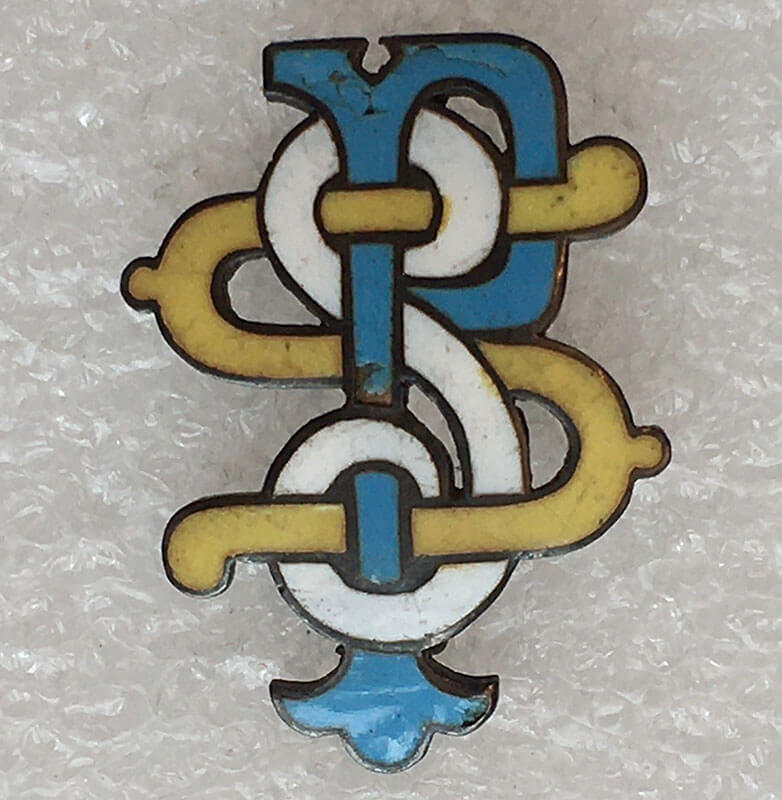 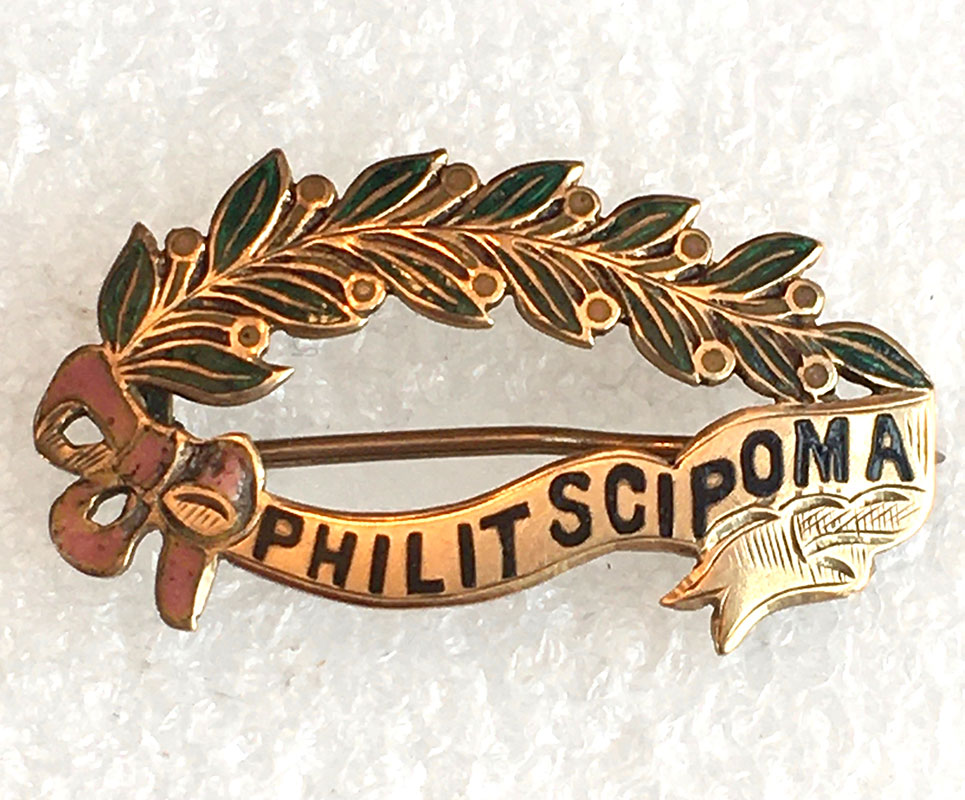 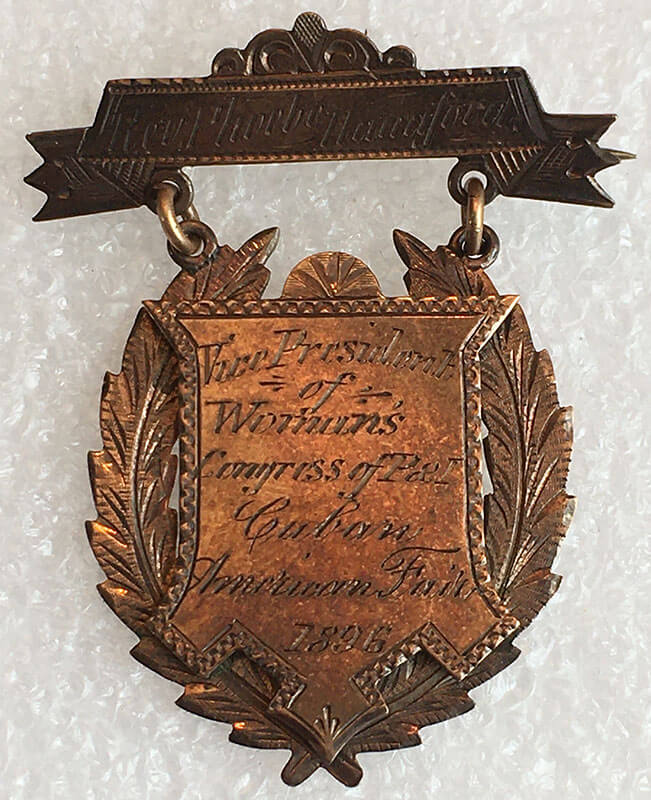 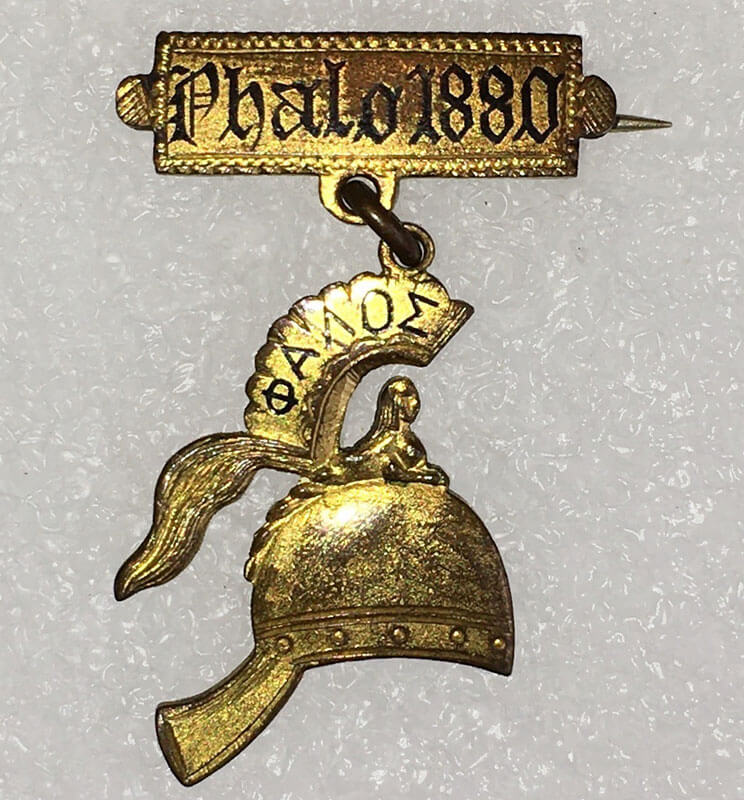 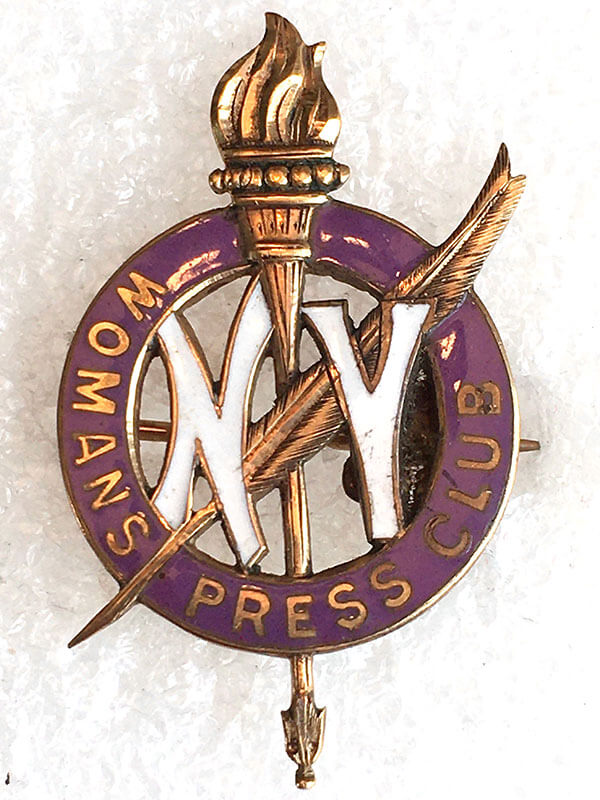 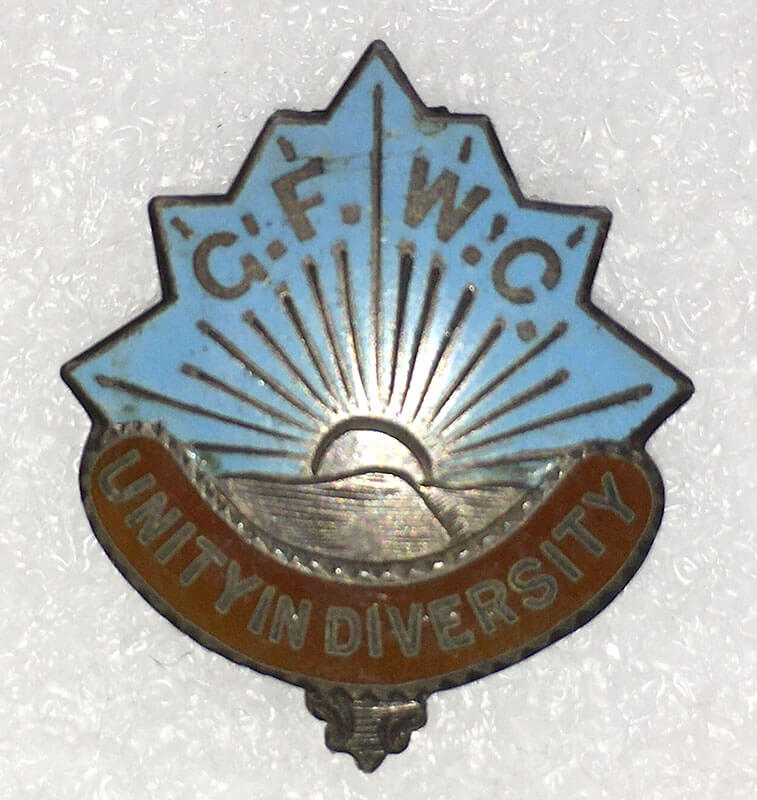 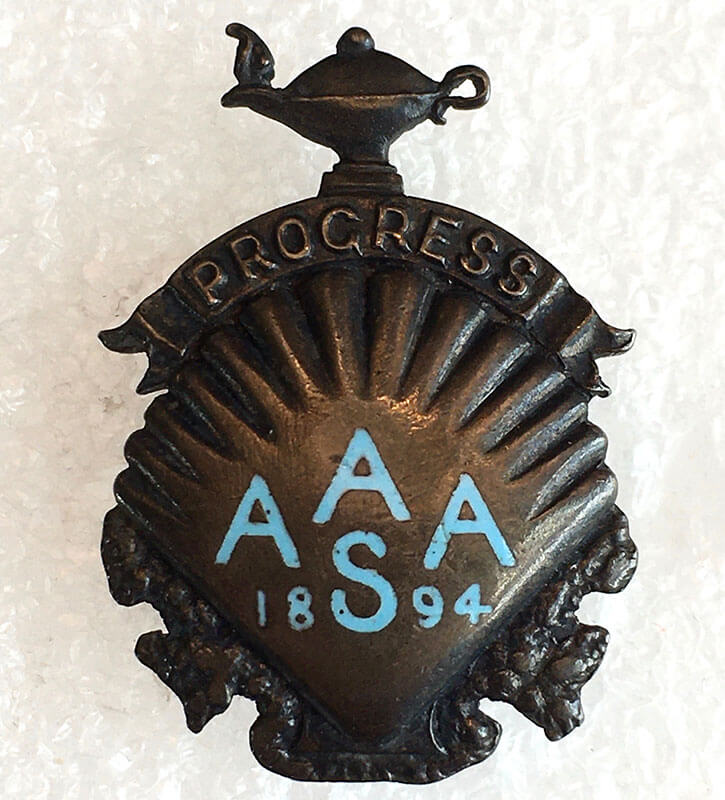 When did women first vote on Nantucket?

Women voted for the first time in February 1880. The Massachusetts legislature passed a law allowing women to vote in April 1879, but it was limited to voting for school committee members. Instructions for prospective women voters were published on the front page of The Inquirer and Mirror in a letter from the Massachusetts Suffrage Association. Women had to be 21 or older, citizens of the Commonwealth for over a year, and residents of Nantucket for six months. There were a number of requirements: 1) women had to be able to read the state constitution and to write their names, 2) prove that they had paid taxes and registered with the town assessors with a list of their estate, and 3) be willing to pay the poll tax. Women were advised to check that their names had been properly placed on the rolls at least ten days before each election.

The women who voted that first year were members of Nantucket’s Suffrage Club. Most were elderly reformers. The first woman to cast her ballot was Lydia Gardner Macy, Anna Gardner’s sister. She was joined by Eliza Starbuck Barney, 78, almost 30 years after she had attended the first woman’s suffrage conference in Massachusetts. Also voting were Anna Gardner, Harriet Coffin Peirce, and Charlotte Austin Joy. Only 13 women voted in that first election. The Inquirer and Mirror noted that the presence of women had not disrupted the town meeting. The men were “respectful” as the women filed in and took their seats to vote.

On August 18, 1920, the 19th amendment granting women the ballot in national elections was ratified. Ten days later, The Inquirer and Mirror reported that 181 women on Nantucket had already registered to vote with many more expected in the coming weeks. One hundred years later, voter turnout rates for women, who constitute more than half the population in the U.S., have equaled or exceeded voter turnout rates for men nationwide. In every presidential election since 1980, the proportion of female adults who voted has exceeded the proportion of male adults who voted. 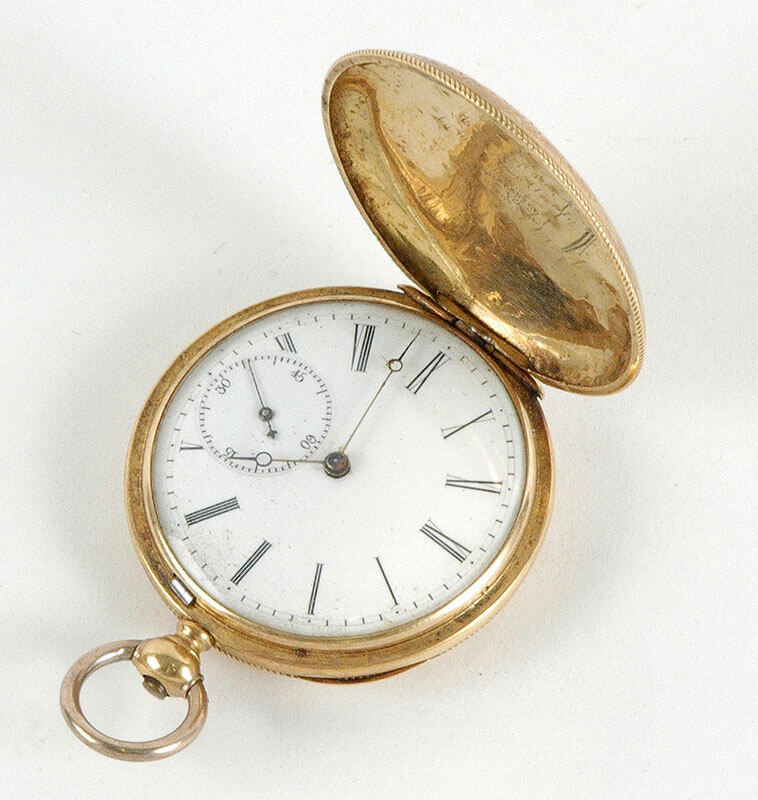 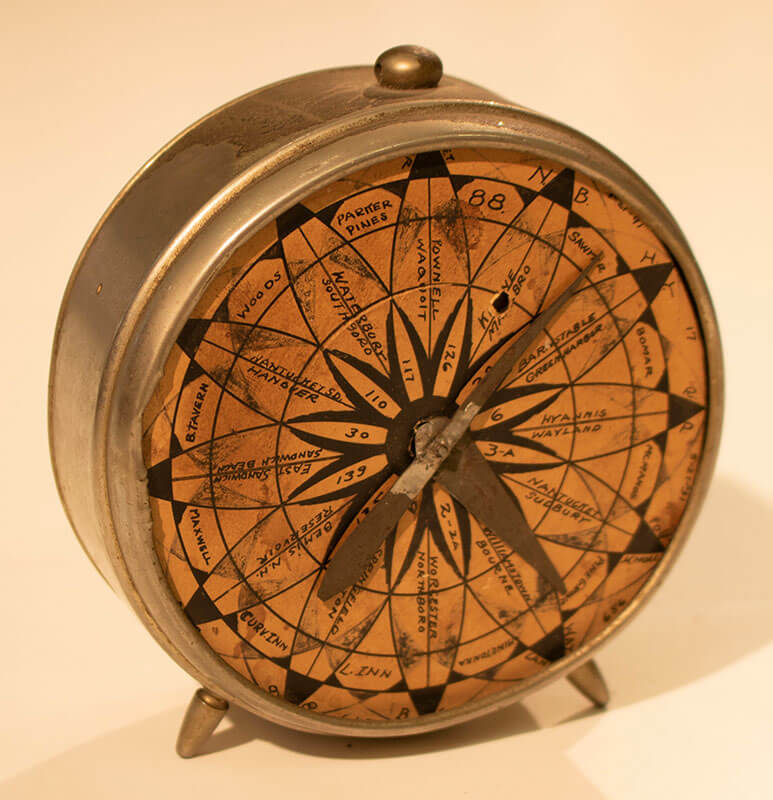 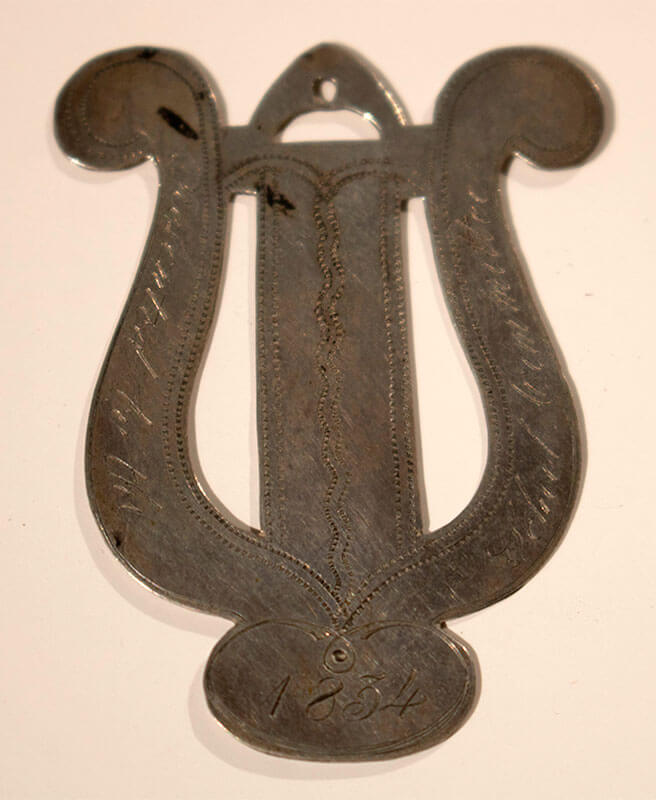 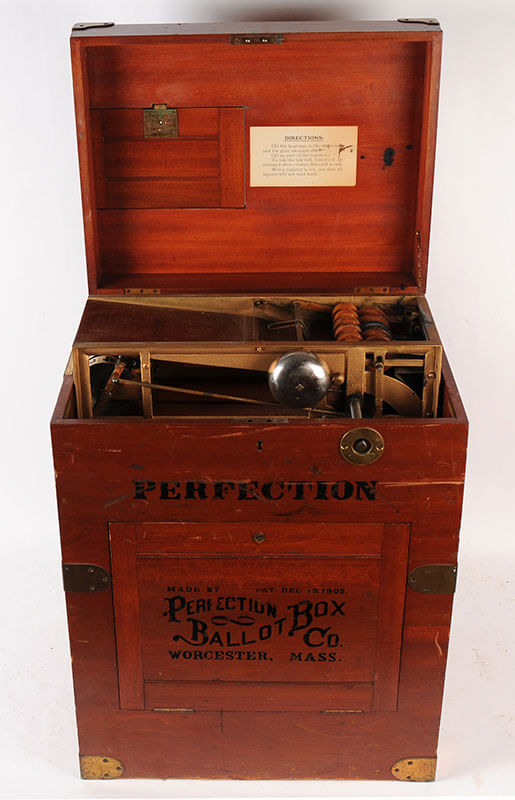 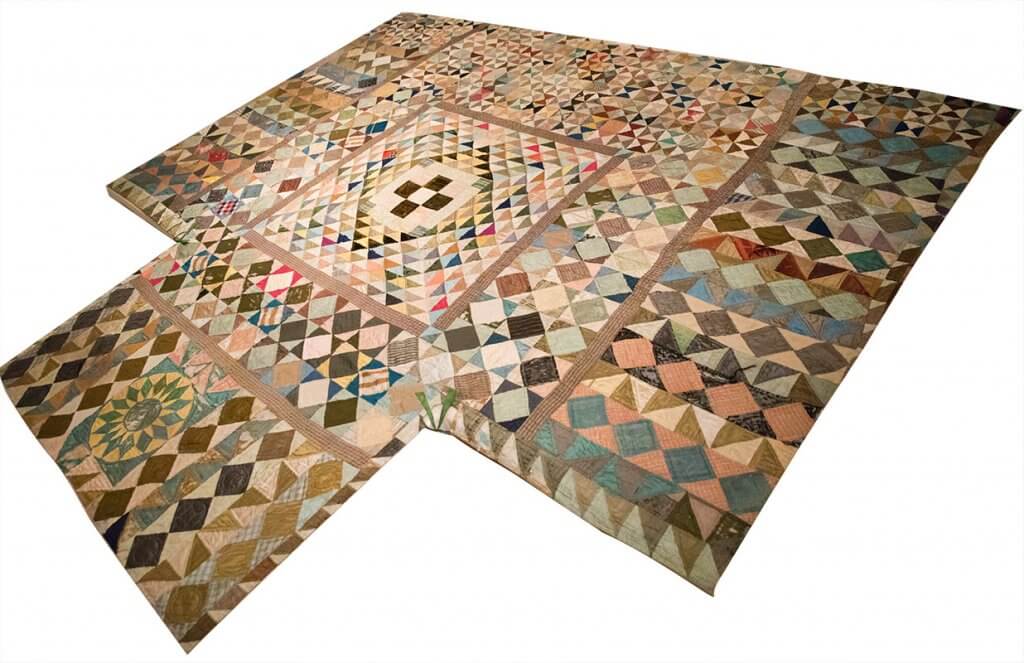 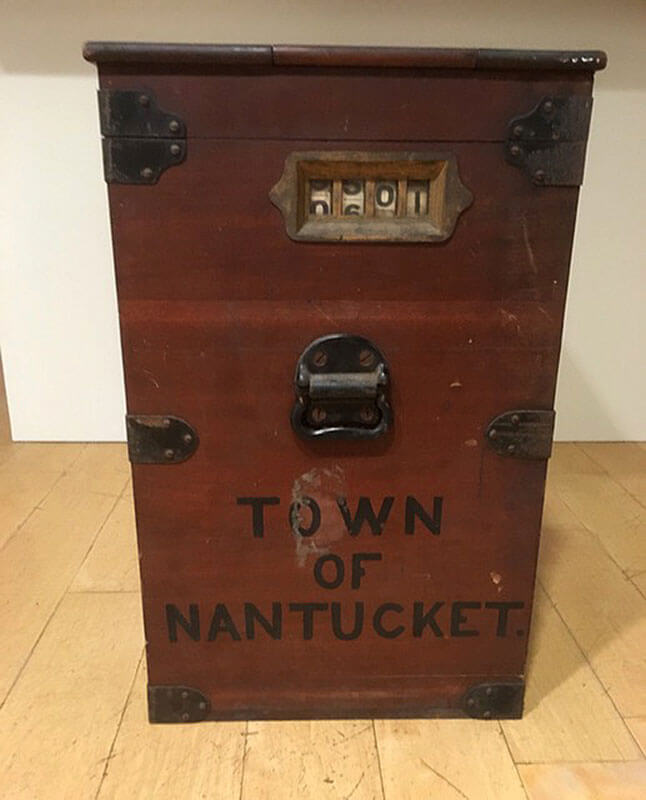 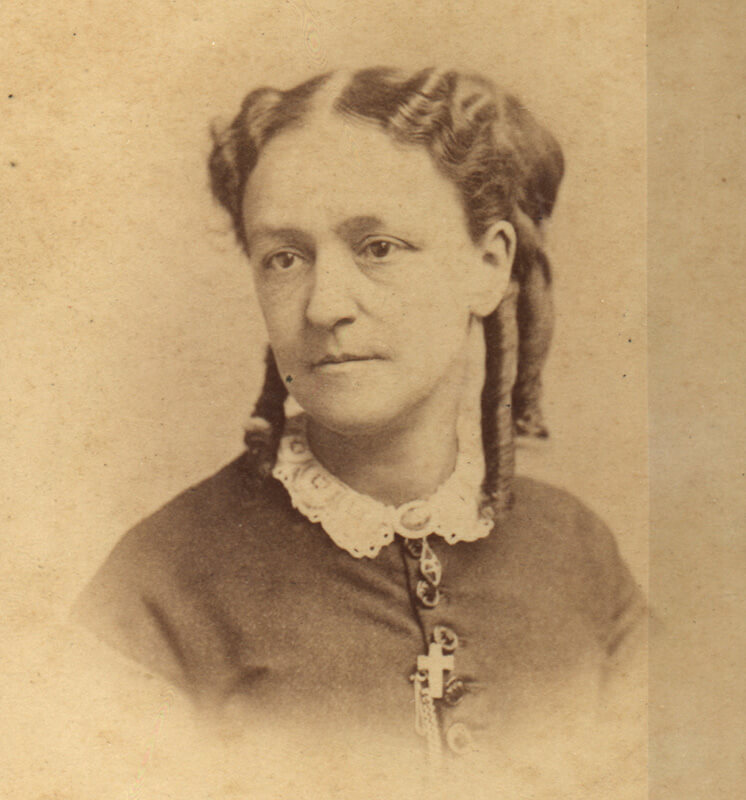 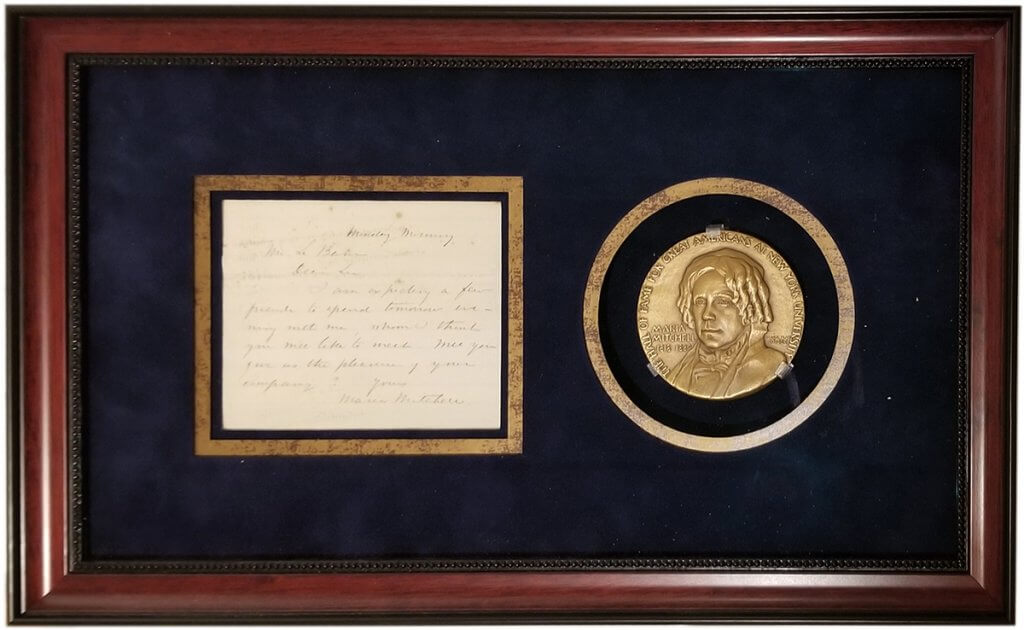 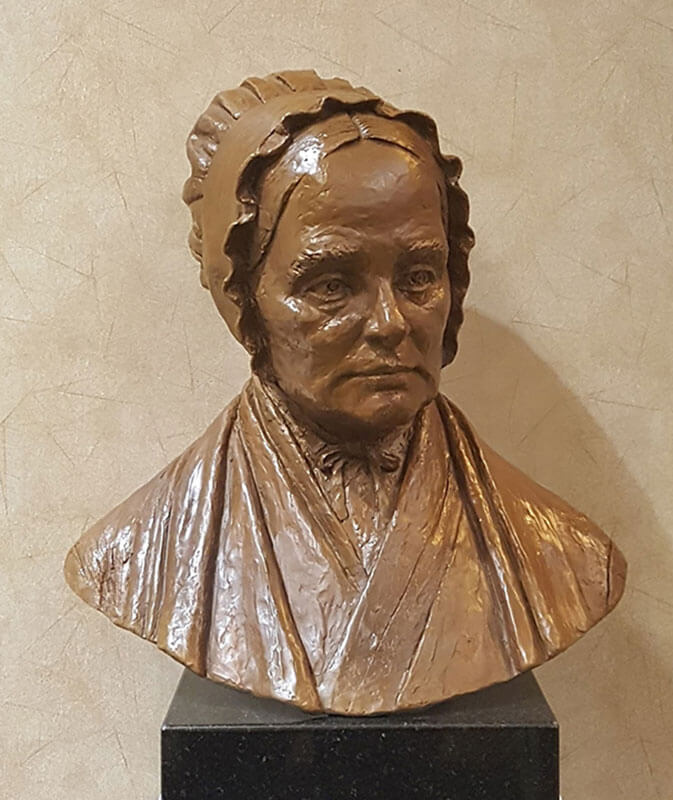 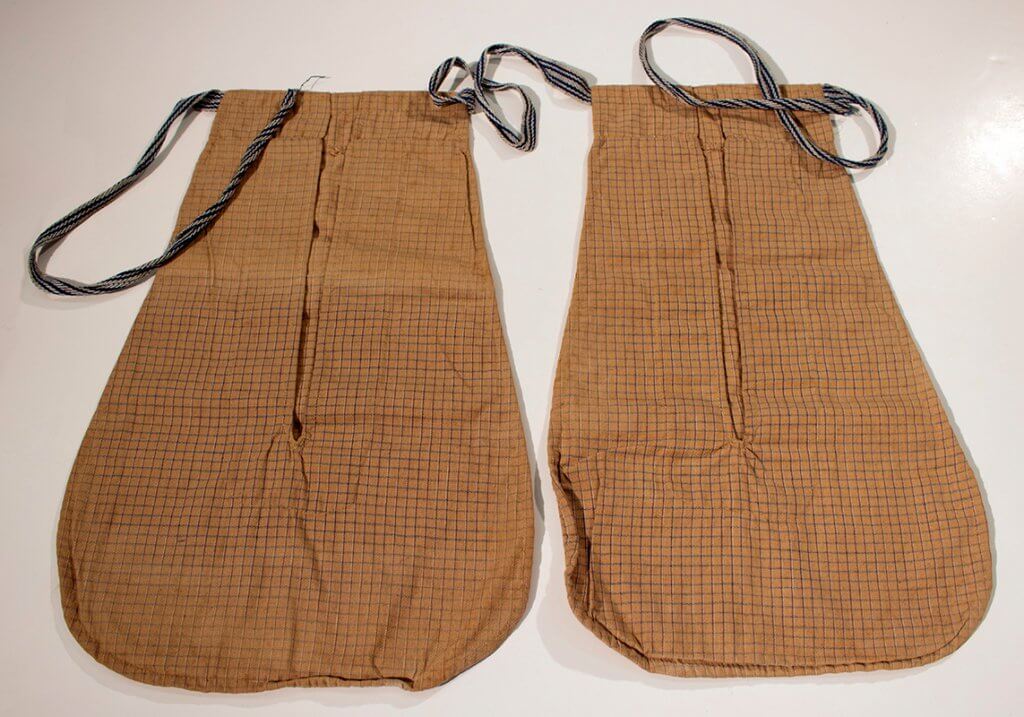 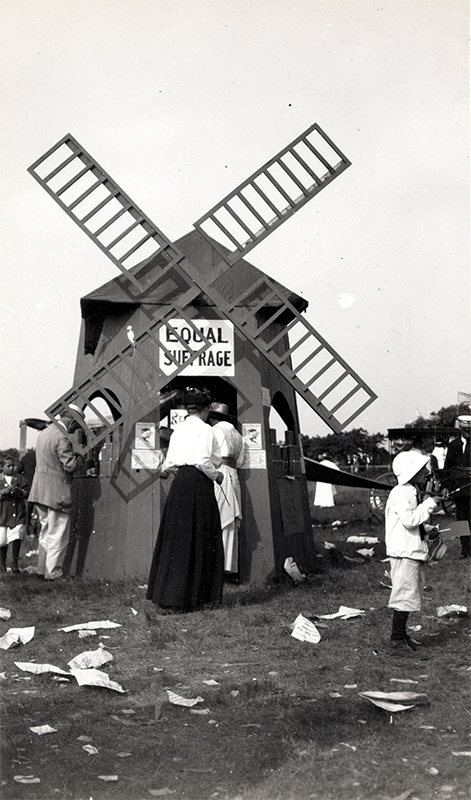 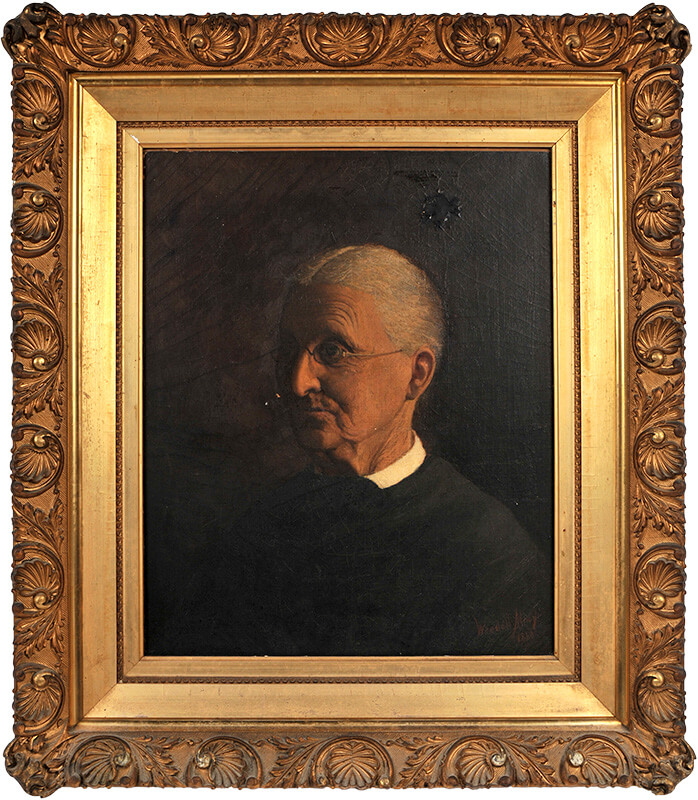