Four Generations of the Boston Family 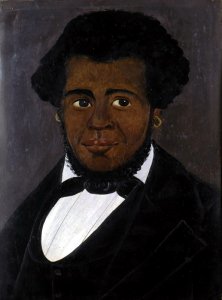 Boston and Maria (no last names) were an African couple held in slavery in the 1700s on Nantucket by William Swain. Birthdates for both are unknown. Maria gave birth to nine children, greatly increasing the Swain family’s ownership of enslaved Africans. Other African women on Nantucket also gave birth to children born into slavery, but in terms of numbers, William Swain’s family was unique.

The birthdates of nine of their children are recorded in a 1760 deed of manumission (legal act freeing an enslaved person):

Black men, both freemen and the formerly enslaved, often made up between 25% and 40% of Nantucket whaling crews. While these men earned nearly the same as their white shipmates, they were customarily excluded from specialized roles higher than cook and steward. Notable exceptions include Captain Absalom Boston who led an all-black crew on a whaling voyage in the ship Industry in 1822; Peter Green, who commanded the John Adams in 1823 after a whale killed the ship’s captain and first mate; and the all-black crew of the Loper in 1829–30.

Peter Green was one of the few Black men known to have served as an officer on a Nantucket whaleship. A veteran of other whaling voyages, he joined the 1821–23 cruise of the ship John Adams as second mate. Eight months into the voyage, Captain George Bunker died of tuberculosis. First Mate Seth G. Myrick assumed command and Peter Green became first mate. In April 1823, Myrick and his boat crew were pulled out of sight by a whale and disappeared. Three days’ searching by the John Adams and the ship Florida, in company, did not find them, and they were assumed dragged under by the whale. Green took command and brought the ship home.

The Voyage of the Loper

Captain Obed Starbuck, a white man, and his all-black crew in the Nantucket whaleship Loper harvested an incredible 2,280 barrels of sperm oil in just 14 months in 1829–30. Upon the ship’s return to the island, Captain Absalom Boston and Samuel Harris, leaders in the island’s Black seafaring community, hosted the crew to a celebratory parade and dinner, paid for by the Loper’s owners. The after-dinner toasts included “Black skin—the best skin a whaleman can see” and “People of Colour—May the enemy of our celebration and of African freedom have eternal itch and no benefit of scratch so long as he live.”

In 1810, as a child, Edward Pompey (ca. 1799–1848) was living in the home of Jonathan Macy and Rose Pinkham Macy and their eight children, probably as a live-in servant. Around 1830, like many others in New Guinea, Edward began to buy, sell, and consolidate land, buying from white land owners and selling to Black purchasers. That same year he became subscription agent for William Lloyd Garrison’s newspaper, The Liberator.

” … Every colored man ought to own a copy, as the book contains the sentiments of his brethren in all parts of the country on the subject of colonization, and fully exposes the wickedness of the American Colonization Society …. [future visit to Nantucket] when I shall be able to tell you, face to face, how much I appreciate your efforts to promote circu­lation of the Liberator, and also to thank my colored brethren for their patronage.”

In 1836-37 he was master of the whaling brig Rising States out of New Bedford, with an entirely Black crew on a short Atlantic voyage. The Rising States went out again in 1837 under William Cuffe, master, and was condemned in Cape Verde that year. In order to be named a master of a vessel, Pompey must have had considerable previous maritime experience, though his name does not appear on crew lists.

The Nantucket Anti-Slavery Society was formed in the 1830s. As a leading figure on Nantucket, Edward C. Pompey was named an officer, serving alongside Nathaniel and Eliza Starbuck Barney, Oliver Gardner, and Oliver’s daughter Anna Gardner.

In 1845, when Eunice Ross had been barred from admittance to Nantucket High School on the grounds of color, Pompey drafted a petition to the General Court of Massachusetts seeking legal relief from school segregation. It was presented to the New Guinea community in the African Meeting House. Over a hundred New Guinea residents joined Pompey in signing the petition. Twenty-five white citizens of Nantucket wrote and sent a petition in support of the Pompey one, and Eunice Ross wrote and signed her own eloquent petition. The three petitions were sent to Boston, leading to the passage of House Bill 1845, which put teeth into an existing law mandating free public education to all children in Massachusetts.

Black Nantucketers Enlist in the Union Army and Navy

The American Civil War was the first in which the Nantucket community willingly participated and the island sent three hundred thirty-nine men, fifty-six over the town’s quota. Previously, Quaker pacifism had kept Nantucketers out of combat. Twenty or so African Americans and other men of color identified Nantucket as their hometown. Most served in the Union Navy, but three joined the 5th Massachusetts Cavalry.

In October 1891, veterans Sampson Pompey, George Michael, and Hiram Reed were elected charter members of the Nantucket Post of the Grand Army of the Republic. Pompey, Michael, Reed, and their fellow veteran Joseph Simons are buried in the Historic Coloured Cemetery with their graves marked with U.S. Government markers. To this day, each grave is decorated with an American flag on Memorial Day.

Hiram W. Reed (1830–1911) spent the early part of his life enslaved in Missouri. In 1860, he was hired out to work on a Mississippi River steamboat. When this boat was subsequently seized by the Union army, Hiram and his fellow enslaved crewmates were issued deeds of manumission that freed them. Following a friend to Nantucket, he enlisted in Company I, Massachusetts 5th Cavalry Regiment, in March 1864, serving until mustered out on October 31, 1865 at Clarksville, Texas. Returning to the island, he married Isabella Draper soon after the war and remained on the island the rest of his life. He worked as a teamster and was active in the local chapter of the Grand Army of the Republic, the Union veterans’ organization.

Benajah Boston Jr., cousin of Nantucket’s black whaling captain Absalom Boston, served in the Union Navy and received a pension. After the war he stayed away from Nantucket until 1916, when he came home long enough to give an account of his eventful life to the Inquirer and Mirror. He died in Rock Island, Illinois, leaving on Nantucket no marker or inscription commemorating his service in the war.

The wife of Oliver Boston, son of Absalom Boston, was a New Bedford woman, and after Oliver’s discharge from the Union Navy, they lived in New Bedford and Boston before he died at the age of 36, leaving no children.